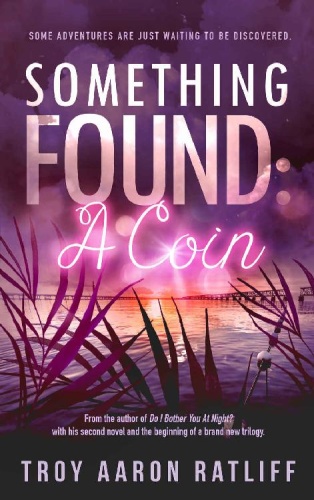 Something Found: A Coin is the perfect beach read filled with "density and texture that will touch readers on an emotional and visual level" but still leave them out of breath and gasping with action, heart, and a tropical calling for adventure.

Local Artist and so-called “Selfless Scavenger” Todd Freeman may have a seemingly idyllic life painting and scouring the Key West sands with his metal detector and returning lost items to grateful locals and tourists. Yet, his past holds grief and pain: the death of his son, the swift end of his marriage, and the tumultuous period that saw him uprooting from his Midwest home and starting anew, under the South Florida sun.

But he never expected, in his routine beach-scouring, to find the mysterious little coin — a coin that would set him on an adventure that he never could’ve imagined. One that would unveil a legend primed to change the world, and rewrite history.

With violent pursuers on his tail and bullets flying, Todd finds himself plunged into an incredible quest that will help him not only uncover one of the greatest mysteries of all time, but test his own strength and bravery to a point he never thought was possible.

Something Found: A Coin is the beginning of an adventure that will set your sails for the Floridian tropics and your heart for the unknown.

What readers are saying about Something Found: A Coin

★★★★★ "…descriptive and provoking; a great beginning for a series" – Reader’s Favorite

AUTHOR BIO
Troy Aaron Ratliff returns with his first novel in seven years and the start of a brand new trilogy. When he’s not writing, Troy is also an accomplished professional artist.