HomeSamantha Shannon - The Priory of the Orange Tree

Samantha Shannon – The Priory of the Orange Tree

Samantha Shannon – The Priory of the Orange Tree 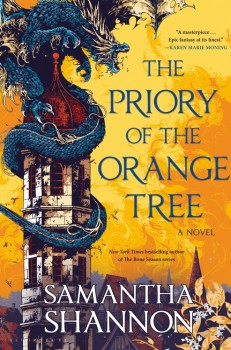 From the internationally bestselling author of The Bone Season, an enthralling epic fantasy about a world on the brink of war with dragons-and the women who must lead the fight to save it.

"Spellbinding . . . This extraordinary saga includes heroism, romance, friendship, pirates, plague, diplomacy, and, of course, dragons . . . with broad appeal for fans of the epic and readers of Zen Cho, Naomi Novik, and V. E. Schwab. Highly recommended." -Booklist, starred review
A world divided.
A queendom without an heir.
An ancient enemy awakens.
The House of Berethnet has ruled Inys for a thousand years. Still unwed, Queen Sabran the Ninth must conceive a daughter to protect her realm from destruction-but assassins are getting closer to her door.

Ead Duryan is an outsider at court. Though she has risen to the position of lady-in-waiting, she is loyal to a hidden society of…