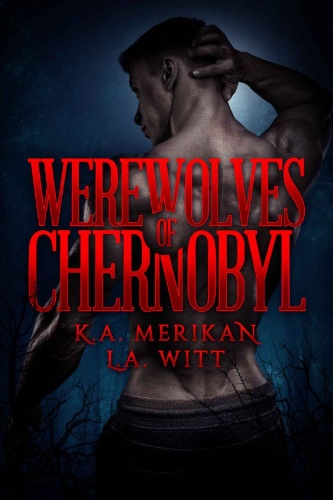 — Being kidnapped by two werewolves is an adventure after all, right? Right?! —

If Quinn wants to get the best photos for his travel blog, no gate is too tall, and no ‘do not enter’ sign actually means he won’t go in. What he finds in a hidden exclusion zone by Chernobyl blows his mind. Mutants? Monsters? He doesn’t know, but he is bound to find out when not one but two of them break into his hotel.
Too bad the rules and attitudes they have toward sex don’t match Quinn’s at all.

Born with a disabled hand, smaller than the other werewolves, Dima is the lowest of the low in his pack, but when he meets the loveliest human he’s ever seen, he knows his luck has changed.
The last thing he expects though is his beloved friend Nazar turning on him once Dima’s affection for Quinn deepens, and he refuses to be mounted by Nazar anymore.

Nazar is a high ranking soldier in his pack, but in his powerful body hides a gentle soul, and all he wants is to escape the pack with Dima. But once Dima claims Quinn as his, secrets Nazar has so far kept hidden rear their ugly head.
The werewolf language doesn’t have words to describe what they crave, so Quinn might be the only one to help them solve the puzzle of the desires that go against the rules of their pack.

Carol Belanger Grafton – Victorian Patterns and Designs for Artists and…