HomeK. A. Doore - The Impossible Contract

K. A. Doore – The Impossible Contract

K. A. Doore – The Impossible Contract 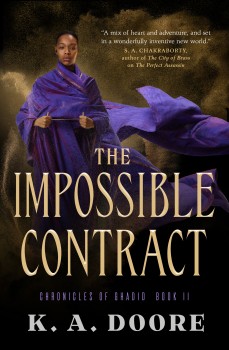 Second in K. A. Doore’s high fantasy adventure series the Chronicles of Ghadid, a determined assassin travels to the heart of the Empire in pursuit of a powerful mark, for fans of Robin Hobb, Sarah J. Maas, and Brent Weeks
Thana knows her desert city of Ghadid inside and out from training her entire life to carry on her mother’s reputation as master assassin. Opportunity to prove herself arrives when she accepts her first contract on Heru, a threatening foreign diplomat with the ability to bind a person’s soul under his control.
But it turns out that Thana isn’t the only one after Heru, as hordes of the undead attack them both during her first attempt on his life. No one can figure out who sent them, including Mo, the noble-hearted healer who analyzes the undead remains.
<p>When Heru returns to the Empire with Mo to report the attack, Thana has no choice but to follow them across the desert to the Empire’s capital. The odds against her grow more…