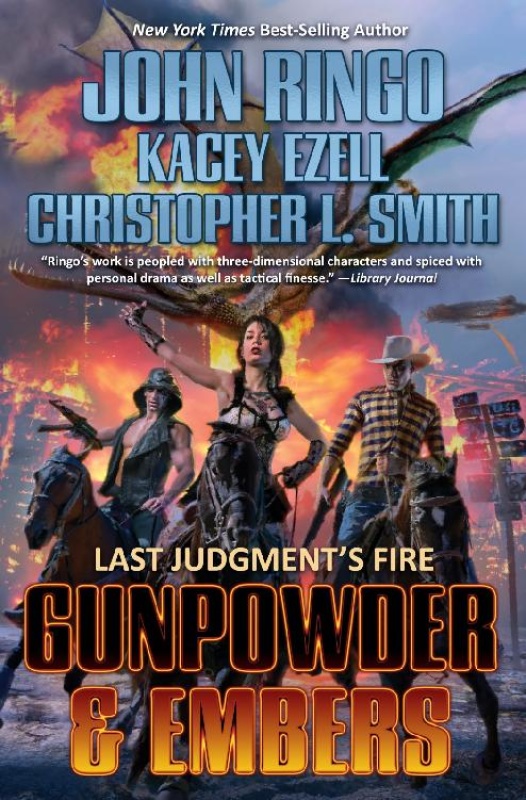 In the smoking ruins of our world, will the struggle for yesterday’s technology spark tomorrow’s global war? A new postapocalyptic novel, in which a young cowboy claims his destiny-and tries to prevent a catastophic war-from  New York Times best-selling author John Ringo, Kacey Ezell, and Christopher L. Smith.
Thirty years ago, the world ended. Giant electrovoric ants and pterodons came through a rift in space-time, millions of humans died, and that was that.  Thirty years later, humanity has rebuilt . . . to an extent.  Without electricity, human ingenuity has provided some creative solutions, but most folks survive at the subsistence level, farming to keep themselves and their families fed.
Chuck Gordon never thought he’d have to leave his family’s farm. The simple life of a rancher was enough for him.
A dying stranger proved him wrong. Now, he’s on the road of destiny, accompanied by a mystic warrior monk, a beautiful dragon tamer, a runaway cultist, and a mysterious drunken lecher, all of them searching for the key to reclaiming humanity’s future and past. Each of them carrying a single spark of hope.
But will that hope be enough to light the beacons of freedom once again? Or will they face the next century in bondage to the last century’s technology?
About <span style="font-weight: 600; font-style: italic">The</span><span style="font-weight: 600; font-style: italic">Valley of Shadows</span>  by John Ringo:
". . . fast-paced . . .  building to an exciting climax . . . Ringo and Massa have written an end-of-the-world novel that is unconventional and entertaining." – Daily News of Galveston County
About Black Tide Rising, coedited by John Ringo (featuring stories by Kacey Ezell and Christopher L. Smith):
“. . . an entertaining batch of . . . action-packed tales. Certainly, fans of Ringo’s particular brand of action-adventure will be pleased.”- Booklist
"This anthology broadens Ringo’s  Black Tide world, serving up doses of humanity amid the ravenous afflicted. Comedy has a place in this harsh reality, and these stories stir adventure and emotion at a frantic clip throughout. Zombie fiction fans will be thrilled."- Library Journal
About the Black Tide Rising Series:
“Not only has Ringo found a mostly unexplored corner of the zombie landscape, he’s using the zombie frame to tackle a broader theme: the collapse and rebirth of civilization. The zombie scenes are exciting, sure, but its the human story that keeps us involved. A fine series.” -Booklist  on the Black Tide Rising Series
About John Ringo:
“[Ringo’s work is] peopled with three-dimensional characters and spiced with personal drama as well as tactical finesse.”- Library Journal
“. . . Explosive. . . . Fans . . . will appreciate Ringo’s lively narrative and flavorful characters.”- Publishers Weekly
“. . . practically impossible not to read in one sitting . . . exceedingly impressive . . . executed with skill, verve, and wit.”- Booklist
“Crackerjack storytelling.”- Starlog
About the work of Kacey Ezell:
"Gritty, dark and damp. Much like the war itself."-Michael Z. Williamson, best-selling author of  A Long Time Until Now
"I loved  Minds of Men."-D.J. Butler, best-selling author of Witchy Eye **

Terry Brooks – A Princess of Landover