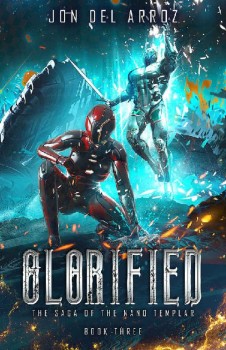 A devastating superweapon.
.in the hands of galactic tyrants. The Sekaran fleet is gathering, and they’ve got a weapon that can destroy worlds.
Drin and his Templar brothers on the Justicar must face their deadliest battles yet, as the entire Elorian fleet is called into action to meet this threat.
But more than one planet killer awaits them. Deadly secrets from ancient races are hidden amongst the stars, and Drin must uncover the power of the mysteries of faith before it’s too late.
Fans of Richard Fox’s Terran Armor Corps and J.N. Chaney’s Ruins Of The Galaxy will be enthralled by the epic conclusion to this military sci-fi trilogy. Purchase today! **