A. A. Milne – Pooh Classics series

A. A. Milne – Pooh Classics series 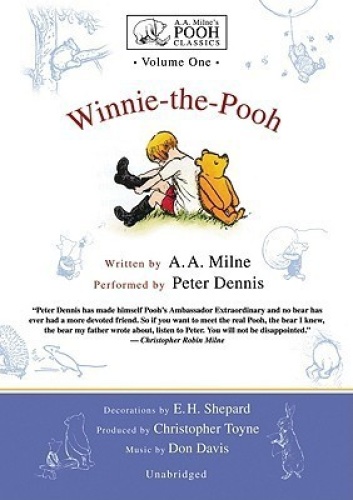 [This is the Audiobook CD Library Edition in vinyl case.]
[*Read by Peter Dennis]
Blackstone Audio presents (from the unabridged collection ”A.A. Milne’s Pooh Classics,”) the ten stories of Winnie-the-Pooh performed by Peter Dennis. This is the only reading of these enthralling stories authorized by A.A. Milne’s son, Christopher Robin, who wrote, ”Peter Dennis has made himself Pooh’s Ambassador Extraordinary and no bear has ever had a more devoted friend. So if you want to meet the real Pooh, the bear I knew, the bear my father wrote about, listen to Peter.”
**This reading by Peter Dennis has earned the prestigious Audie Award, Parents’ Choice Gold Award, Ohio State Award of Merit, and the Corporation for Public Broadcasting Silver Award.
Come with us to an enchanted place, a forest where Winnie-the-Pooh lived with Piglet, Rabbit, Owl, Eeyore, Kanga, and Little Roo. The stories are about Christopher Robin and these good companions having wonderful times getting in and out of trouble. It is all very exciting and, really, quite thrilling no matter how young or old you may be.
Included are the following 10 stories:
I. In Which We are Introduced to Winnie-the Pooh and Some Bees, and the Stories Begin
II. In Which Pooh Goes Visiting and Gets Into a Tight Place
III. In Which Pooh and Piglet Go Hunting and Nearly Catch a Woozle
IV. In Which Eeyore Loses a Tail and Pooh Finds One
V. In Which Piglet Meets a Heffalump VI. In Which Eeyore Has a Birthday and Gets Two Presents
VII. In Which Kanga and Baby Roo Come to the Forest, and Piglet Has a Bath
VIII. In Which Christopher Robin Leads an Expotition to the North Pole
IX. In Which Piglet Is Entirely Surrounded by Water
X. In Which Christopher Robin Gives a Pooh Party, and We Say Good-bye