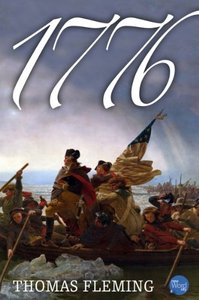 To state it in its baldest terms: This was the one time in American life when idealism was truly in flower. Made possible by the purest form of patriotism, led by a soldier whom everyone adored – George Washington – who, in turn, was guided by a caucus of political geniuses in Philadelphia – the Continental Congress – sturdy farmers raced from their plows to hurl themselves into conflict with British mercenaries. Never have so many great men, magnetic leaders, sprung from nowhere to guide a people infused with a beautiful enthusiasm for liberty.

In this book, New York Times bestselling historian Thomas Fleming explodes this myth by examining all the dimensions of that year – particularly the least known aspects of the common, fallible humanity of the men and women of the Revolution.

The year 1776 ended with both the Americans and the British stripped of their illusions. Both sides had been forced to abandon the myth of their invincibility and to confront the realities of human nature on the battlefield and in the struggle for allegiance to their causes.

For the Americans, it had been a shock to discover that it was easy to persuade people to cheer for life, liberty, and the pursuit of happiness, but it was another matter to persuade them to take large risks, to make real sacrifices for these ideals. For the British, their goal of achieving proper subordination of America to England was frustrated forever.

Eric Shanes, “The Life and Masterworks of J.M.W.Turner (Temporis Series)